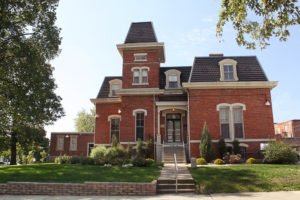 Upon visiting the museum, you’ll find an extensive collection of artifacts that date back to 1866. Several rooms are decorated in the early 20th century style, including the parlor, kitchen, and bedrooms.

There are several permanent exhibits showcasing life in the early 1900s as well as life in Hendricks County through the years. Here are a few highlights:

Current changing exhibits include a number of fun items. Check out Through the Years with Children’s Literature, a collection of antique children’s books and toys on loan from a local teacher. See promotional posters from Danville’s Royal Theater. You can also check out quilter Jo Terrell’s quilt featuring historic churches found in Hendricks County.

You can visit the Hendricks County Historical Museum on Saturdays from 11 a.m. to 3 p.m. from March through December. There is no admission fee, but donations are encouraged. You’ll find the museum at 170 S. Washington Street in downtown Danville.